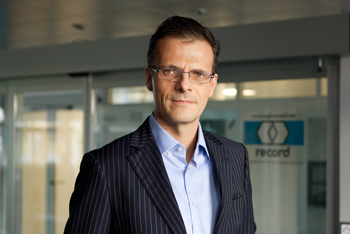 When our founder H.H. Bunzl began the production of automatic door systems in 1953, he was among the pioneers in the industry. The growing number of rival manufacturers was met by a strong will to innovate, which has enabled our products to stand out from their competitors. Since the beginning, innovation has been a key driver and crucial factor in our steady growth.

The agta record group continuously works to modernize and optimize their door systems to provide their customers with advanced, innovative products. Sustainable, modern development is crucial for the success of the entire enterprise. For this reason, agta record operates a research and development center in Switzerland. Each year, a significant part of the company's cash flow is invested in further developing its own products.

2006 saw the introduction of the record system 20 and the most successful chapter in our history. As is still the case today, this was pioneering technology that set new standards at its various stages of development. Its core element, the CAN-bus networking system, significantly enhanced functional reliability and user-friendliness.

Building on the technical possibilities of the record system 20 were numerous ideas that developed into a product that combined the delicate appearance of the door system with energy-saving, heat-insulating properties. An important element of this project was the preparation of serial production of thermally insulating door profiles, available in an ultra-slim design, in contrast to standard versions on the market. This product was called the record THERMCORD, and first introduced in 2012. This model is already reducing energy costs at an outstanding degree. THERMCORD PLUS, which features active seals, is a radically redesigned successor.

THERMCORD PLUS is the first door system from agta record to contain all the components of a fully sustainable product. Its outstanding energy saving properties make it exceptional. The main objective of its development was to provide customers with a door system that is affordable and surpass all known standards. This product has completely updated the concept of the automatic door, on the one hand in the way its design has been developed, and on the other by its technical features. Elements of the THERMCORD series have been successively influenced by design planning in all other areas of our automatic door systems, and thus closely define our future strategic direction.

The aim and goal of the agta record Group is to maintain operations on a holistic and sustainable basis. To ensure this, all aspects of modern corporate management are being considered and implemented.